Shannon here: This post was written by my partner in crime (and husband) Ben, also an avid reader. I have tracked my own reading for years and offered to do the same for him starting in 2016. 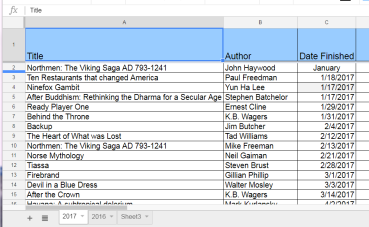 A screenshot of the tracking spreadsheet…yeah, there’s a spreadsheet.

I read for enjoyment first and foremost. So I tend not to have specific goals. But Shannon started keeping a reading journal, and once something is measured we naturally start to become a little more conscious of how we approach it.

I once boldly estimated my reading pace as “about a book a week.” In 2016, the first year that Shannon started recording our reading, I read a whopping 34 books. If you’re too lazy to do the math, rest assured that this is distinctly less than a book per week. So my most obvious goal was to live up to my boast for 2017.

I had a secondary goal of reading more books than Shannon. With 2 days left in the year my tally stands at 61. So I’m looking great for my primary goal. Secondary goal…not so much. I have 2 books halfway done. If I polish those off that’s 63. Still not quite there. She cheats though, she had a lot more time off this year.

While we’re comparing notes, Shannon indicated an intention to read primarily female authors. Without putting much conscious effort into it, I skewed in the opposite direction. Of my 61 recorded books, 48 have male and 13 have female authors.

Rather than try to pick out my favorites, I’ll try to sketch some trends that developed in my 2017 reading. 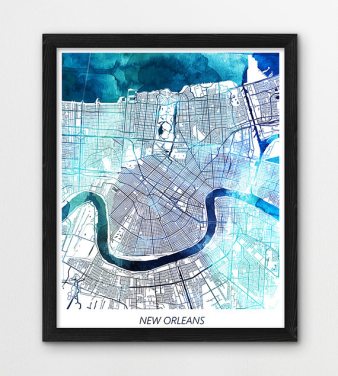 One of Ben’s Christmas presents: A framed New Orleans map by ULTRASONIC BOOM via etsy.

I read a lot of books about cities. I’m in a long-distance relationship with New Orleans. My hometown, South Bend, is undergoing some fairly rapid changes. So this is a subject that was clearly on my mind. Peter Kageyama’s For the Love of Cities and Peter Moskowitz’s How to Kill a City led almost inevitably to Jane Jacobs’ opus The Death and Life of Great American Cities. It added up to sort of a mini-course in urban planning, development, and the hot-button issue of gentrification.

I’ve always had an affinity for the Norse gods, and this year it was strongly reflected in my reading. I read 8 books on the subject, including multiple retellings of the myths and sagas themselves, non-fiction works addressing Viking culture and history, novels based on the mythology, and fiction that drew strongly from these themes. A.S. Byatt, Neil Gaiman, Bernard Cornwell, and Joanne Harris were some of my favorites on this topic.

Or more accurately, the lack thereof. I read a couple of his short stories, but for the first time in a while none of his complete books. I usually read at least one Hemingway book each summer. Somehow in my mind the two go together. But this year, in a somewhat similar vein, I read F. Scott Fitzgerald’s collection of unpublished stories I’d Die For You and Other Lost Stories. Those stories were unpublished for a reason. It’s interesting as a literary artifact, but I thought less of Fitzgerald as a writer after finishing it.

The question of how to live one’s life is always present, often vexing, and usually worth some thought. A couple of my favorite books this year fall into this category. Steven Batchelor’s After Buddhism is an amazing distillation of Buddhist philosophy from an atheist/agnostic perspective. And the most entertaining title of the year was Mark Manson’s The Subtle Art of Not Giving a F*ck. It trends a bit more toward the self-help side of “philosophical” but it’s a bracing wake-up call for those times when the world has tricked you into sweating the small stuff. It’ll help you remember how to, as they say in Fight Club, “let that which does not matter truly slide.” Montaigne in Barn Boots was one of the most deeply human books I’ve read in recent memory. And I got the sense that Michael Perry was starting from a completely different place than me, but that we were working our way to a common ground.

This was the year that I really dove into the amazing noir of Walter Mosley. Easy Rawlins, Leonid McGill, Fearless Jones, I don’t care which series it is, bring ‘em on. Unless it’s the Crosstown to Oblivion series. Classic case of an author who is awesome at one thing trying to do a different thing. And he’s not as good at it, but it gets published because he’s a big name. And people read it because they love his other stuff. And then they say, “Stick to what you’re good at.” I’m all for artistic freedom, but I’m not gonna be fooled again.

I love browsing the new non-fiction section for intriguing titles. Ten Restaurants that Changed America (fascinating), Dead Mountain: The Untold True Story of the Dyatlov Pass Incident (mysterious and tragic), When Violence Is The Answer (some brutally real talk), Sextant (let’s go sailing immediately), and The Nordic Theory of Everything (politics, not mythology) were all fun ways to broaden my knowledge.

Throw in some science fiction, fantasy, sports, mystery, and rock n roll and you’ve got my 2017 in books. A special thank-you to Shannon for starting the reading log that is now spawning this blog.