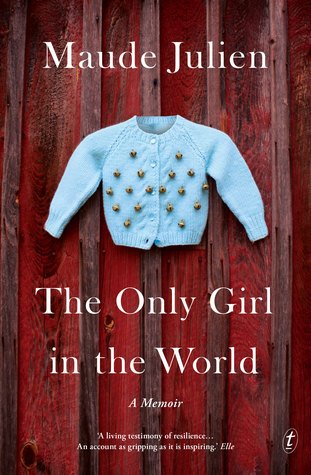 Maude Julien grew up a captive on a lonely estate in France. Her father, Louis Didier, was a fanatic of some sort, not religious really, more of an extreme narcissist with unusual world views that leaned toward Occult-ish. Maude’s mother, Jeannine, a captive herself, aids Maude’s father in the abuse of their daughter and meets any show of favor toward Maude with resentment.

Because Maude’s father believes she needs to be trained to be “superhuman,” her childhood consists of one trial after another through which she is supposedly being toughened up.

In addition to chores, waiting on her father hand and foot, and being loaned out as a hard laborer to workmen who come to fix/build things on the estate, Maude is subjected to tests of endurance meant to build her strength for the time when she is destined to “raise up humanity.” Whatever the eff that means. What it means for Maude in the meantime is that she’s forced to live in a room with no heat; bathe in cold water; and be locked in a cold, dark cellar from time to time, where she’s told to “meditate on death.”

This is a pretty straight forward memoir of abuse. Maude is a captive; she turns to books and her animal friends for comfort and escape. It’s sad and if you have any problems reading books about children or animals being hurt (including childhood sexual abuse), this book is not for you.

The problem, as I see it, is that this story leaves some weird details unresolved. For example, it’s mentioned several times that Maude’s mother was a captive herself, originally the youngest daughter of a poor miner, given to Louis when she was only five. The introduction mentions this “transaction” and says it’s not clear whether there was any money exchanged, but that Louis promised to care for Jeannine, who he said “wouldn’t want for anything,” with the caveat that her parents “no longer see her.”

That’s all we get about Jeannine, other than that she was poor before she came to live with Louis and that he sent her to boarding school, then eventually impregnated her.

At the end of the book, Maude escapes the estate by going to live with her music teacher, a kind old man who sees she’s is suffering and convinces Louis to let Maude live with him for extensive musical training. (One of Louis’ goals was to make Maude a virtuoso musician and much of her childhood was spent learning various instruments, including piano, accordion, trumpet, and a host of others.)

So, somehow Maude gets to go live with Monsieur Molin, the music teacher, and she works in his shop and is very happy there, the end. I guess.

At the end of an abuse story, I need one or two things to happen: the abused person needs to find healing in a future free from their abuser and/or the abuser needs to get his comeuppance.

The complete lack of denouement in this memoir made the ending feel unfinished and left me wondering what the author’s life is like now and how she came to write a book about her experiences. I’ll go search for some interviews online and see what I can find.

2 thoughts on “The Only Girl in the World: A Memoir”