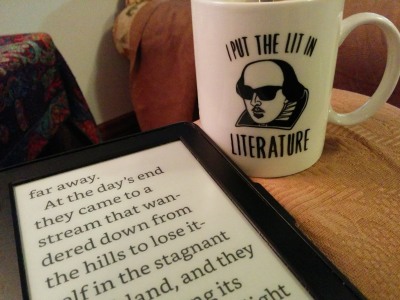 I’ve spent the last two weeks with some old friends. Namely, Frodo, Sam, Aragorn, and the rest of the The Lord of the Rings characters.

It’s funny, I’d been thinking about re-reading this series, which I hadn’t read since college (when the movies came out). And I don’t think I even made it through Return of the King.

I remember that I had the flu and spent a couple of days in bed feeling crummy but comforted by the Fellowship as I worked my way through the first book, then went on to the second.

Weirdly enough, I had the flu the first week of January this year (we had to cancel our New Orleans-themed New Year’s Eve party because of it—boo) and, between coughing and moaning and downing Tylenol with Codiene* left over from my recent surgery, I felt absolutely compelled to re-read The Lord of the Rings.

I downloaded the first book on my Kindle and, once again, it was a great source of comfort while I languished in crapulence. That probably says something meaningful about the power of stories or literature or something, but I can’t be bothered to figure out what.

I don’t have anything monumental to say about re-reading the series, I’m afraid. But I’ll share some random-thoughts-I-had-while-reading.

Also, *spoiler alert*: If you haven’t read the books or seen the movies, there’s a spoiler below.

The Fellowship of the Ring 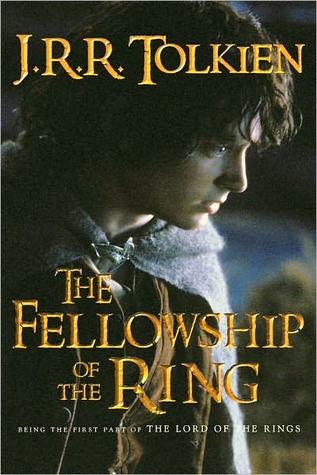 Don’t hate on the movie covers – they sell books.

I had fun noting things that were different from the movie, though I felt the movie was pretty true to the book overall. (Here’s a breakdown if you want to geek out.) All the Peter Jackson movies are burned into my brain as I’ve seen them countless times. I’d estimate almost once a year since they came out.

I thought I’d most enjoy the journey from Rivendell with the entire Company. Turns out, I really liked the part where the hobbits leave the Shire and journey with Aragorn from Bree. Also, Aragorn smiles more in the book. I liked that.** 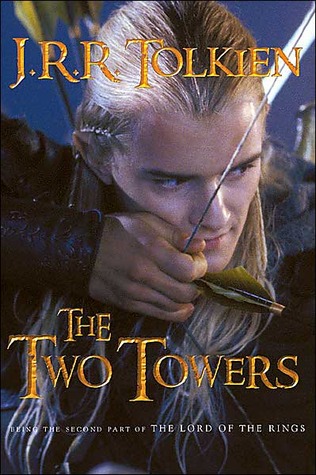 Not much stood out to me in this re-read. I didn’t recall that Elves had super powers of sight and Legolas uses that a lot. The time spent with the hobbits is super depressing, though Gollum livens things up a bit with his kooky-ness. 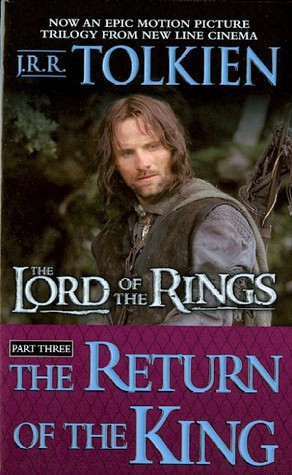 The Return of the King

I definitely hadn’t read this one before. I realized that as I got deeper into the war and then the denouement when I had no memory of any of it.

Éowyn: What a badass. Here she is giving sass to Aragorn:

‘All your words are but to say: you are a woman, and your part is in the house. But when the men have died in battle and honour, you have leave to be burned in the house, for the men will need it no more. But I am of the House of Eorl and not a serving-woman. I can ride and wield blade, and I do not fear either pain or death.’

‘A cage,’ she said. ‘To stay behind bars, until use and old age accept them, and all chance of doing great deeds is gone beyond recall or desire.’ 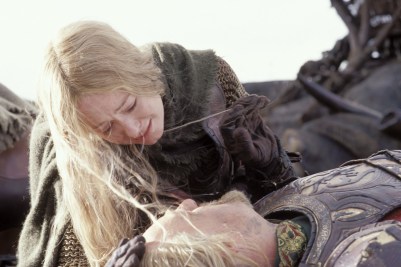 This didn’t happen in the book, but whatevs.

Aragorn: I loved seeing Aragorn come into his own. I know it’s called Return of the King, but I honestly forgot how much he has to step up and take charge. He’s all the time declaring himself and taking things into his own hands and I’m all, you GO girl.

Théoden: I can’t remember the last time a book made me cry. And I read some tough stuff. But yeah, I cried when Théoden died. HE’S SO BRAVE.

Bill: He got back to Bree safely. I COULDN’T BE HAPPIER.

‘Well Saruman!’ said Gandalf. ‘Where are you going?’

‘What is that to you?’ he answered. ‘Will you still order my goings, and are you not content with my ruin?’

‘You know the answers,’ said Gandalf: ‘no and no.

Also, orc-dragging is a verb now.

‘Well, I like that!’ said Pippin. ‘Thief indeed! What of our claim for waylaying, wounding, and orc-dragging us through Rohan?’ When do we move in?

The Shire: Re-taking the Shire was completely missing from the movie, which I kind of knew, but I didn’t realize what a big part of the end of the book it was. I remember when the movie came out and one of my college professors said, “That movie should have ended four times!” Well, even that extended denouement was leaving out big parts of the book.

Also, Sharkey turned out to be Saruman (and Wormtongue)? That seemed silly. I understand that Saruman is bitter and wants to ruin everything, but it’s so petty to go around slapping hobbits when you used to be one of the most powerful wizards in all Middle-earth. I guess that’s just what he was reduced too. Still, it seemed incongruent with his character somehow.

And those are my landmark thoughts. Have you read the series recently? If so, what stuck out to you?

I’m ready to watch the movies.

*Yep, my muscle ache was that bad. The flu is ass.
**As I said, these thoughts are far from groundbreaking, sorry.