Why am I grouping these two books together, you may ask. Well, for no other reason than that I finished them both over the weekend. They don’t particularly go together although they’re both easy reads.

The Year of Less: How I Stopped Shopping, Gave Away My Belongings, and Discovered Life Is Worth More Than Anything You Can Buy in a Store by Cait Flanders 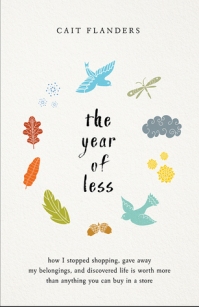 I was semi-interested in this book because I am a follower of personal finance blogs in the hopes that their frugality will rub off on me. Cait Flanders is a veteran in this arena. So I snagged her book at the library and, honestly, it wasn’t what I was expecting, but in a good way.

Flanders has a relatable voice, the same that comes across on her blog, and I found her really endearing as she describes her foibles and failed plans along the way to financial stability. She also talks about her family life, weight loss, and her decision to give up drinking, admitting her failures along the way, which is what really got me. She was so open and honest about her struggles and didn’t try to make poetry of them like hardcore memoir-writers do. I appreciated that. Sometimes you just want to peek into someone’s life without a literary education.

Break in Case of Emergency by Jessica Winter 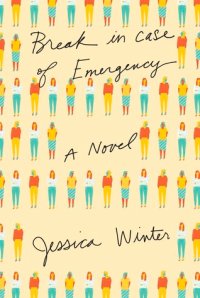 I discovered this book on this list of The 12 Worst Workplaces in Contemporary Literature. The library had a copy, so I grabbed it on Saturday and read it in a couple of hours.

If you work in an office, or if you’ve ever had to forward someone an email you already sent them to prove you did something, you’ll probably enjoy this one. It’s the story of Jen who’s been laid off during the economic crisis of the mid-aughts. She gets hired as a communications person for a nonprofit organization called LIFt, which ostensibly has the mission of empowering girls and women the world over, guided by a “weird jumble of Buddhism and libertarianism.” The first scene is a meeting in which company head Leora Infinatas (self-named) throws out incomprehensible platitudes as ideas in an effort to have a meaningful exchange with her employees. Everything’s very meaningful at LIFt.

Having encountered that particular brand of empty rah-rah, speaking-in-motivational-quotes bullshit through any acquaintance who’s ever participated in an MLM scheme, I was intrigued to see how this kind of language would be laid out in a novel.

Unfortunately, I found Winter’s writing to be cumbersome, packed with lengthy sentences stacked on top of one another. It’s a dense-ness that, I imagine, felt easier to write than it was to read.

This isn’t even the longest, but it’s a good example of the many actions and concepts that can be crammed into a Jessica Winter sentence or two:

“Jen stifled a smile and looked down at her open notebook, where she’d written board meeting notes with her fountain pen and gradually added serifs and flourishes until the letters became a row of gerbera daisies and flamingo lilies. From the first time they’d met, Jen recognized Karina as a master of the filibuster, but she hadn’t yet seen Karina cast the spell on Leora—the gift of shrouding any and every topic in a fluffy word cloud of reiterative agreement until the original query was swallowed up in the woozy vapor of resounding enthusiasm for an unstated but sublime goal.”

The text is blocky like that most of the way through, though it’s broken up at times by delightful dialogue, the most enjoyable being exchanges between main character Jen and her manager, Karina. Karina gives poor Jen no real guidance, even when Jen asks for it directly, and is the kind of boss that criticizes Jen for arriving 12 minutes late to work one morning after a fertility treatment.

Here’s a wee taste of the delightful horseshit Winter is poking fun at:

“Look, Jen,” Karina said to her computer, “if this opportunity just isn’t calling your name—if you just can’t hear it—I understand completely. There’s plenty of other people on the LIFt team who might be able to strike that harmony the moment they hear the tune, so to speak.” Karina clicked her mouse to open an email.

“No, no, I’m excited to go—I can hear the harmony!” said Jen, finally succumbing again to the lure of the cushion-laugh. “I can’t wait. Apologies for giving off a different impression.”

“Like I said, just open yourself up to the journey,” Karina said to her email.

So, those parts of the novel are definitely enjoyable. The rest was a sort of superficial exposition of Jen’s marriage, female friendships, and fertility issues. Lots of meaty topics there, but none of them delved too deep, and I wasn’t interested anyway.