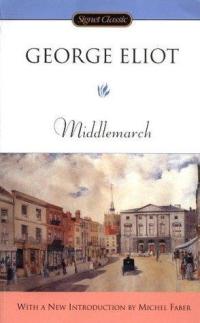 This post used to be subtitled “Waving the White Flag.” You guys, I almost gave up. Middlemarch by George Eliot is a novel that I felt was leaving a gaping hole in my literary repertoire. Now that I think about it, I believe I chose to take a class on the Romantics in college rather than a class on the Victorian novel. So, I missed this novel somehow.

And I almost gave up on it.

Honestly, between Dorothea Brook, whom I found insufferable, and the lengthy expostulation on politics, I could not take it. I’m not against politics in books on the whole and this one, especially, is known for its exploration of Parliamentary reform. So, I get it. That stuff was important to Eliot. It shaped both her world and the world she wrote about. But, man, it just bored me to tears. I even tried to listen to the story via Audible, read by my all-time favorite narrator, and that was worse because I got bored and tuned it out.

Last week, when I looked ahead on my Kindle and realized I was only halfway done, I thought, “It’s time to wave the white flag.”

But then, thanks to the LitHub daily newsletter, I was alerted to Jennifer Egan’s post for The Guardian on how Eliot’s love life played into her writing of Middlemarch. I read it and that bit of context gave me a new appreciation for the novel, so I decided to plug on in the interest of seeing what happens to these characters.

Anyway, as Egan says, this is the story of three marriages of different classes and kinds. The primary is Dorothea’s marriage to Mr. Casaubon, who is an aging scholar intent on researching his latest project. His personality is dry and not many people find him anything but a bore, but Dorothea, who is strikingly beautiful but quite pious, is drawn to him because she’s made it her life’s goal to help and support a great man with a great mind. It’s a telling situation because Dorothea has lots of ideas and opinions of her own, and she wants desperately to live a large and meaningful life, but she can only see putting her desires to use via passionate support of a good husband.

Sadly, Casaubon just wants a wife who will keep him company and keep his house:

Providence, in its kindness, had supplied him with the wife he needed. A wife, a modest young lady, with the purely appreciative, unambitious abilities of her sex, is sure to think her husband’s mind powerful. Whether Providence had taken equal care of Miss Brooke in presenting her with Mr. Casaubon was an idea which could hardly occur to him. Society never made the preposterous demand that a man should think as much about his own qualifications for making a charming girl happy as he thinks of hers for making himself happy.

I feel for Dorothea but I also found her piety exasperating. She gives up riding, even though she loves it, because, as far as I could tell, it’s a form of self-indulgence because she enjoys it. Uuugh. This is what religion does to some people.

Anyway, I much prefer sensible Mary Garth who is of the middle class and must work for her living as rich Mr. Featherstone’s nurse. At one point early on Rosamund Vincy, niece of Featherstone and daughter of the town mayor, who’s brother Fred is in love with Mary Garth (I know, I’m digging into the weeds), asks Mary what she’s been up to, and Mary replies “I? Oh, minding the house—pouring out syrup—pretending to be amiable and contented—learning to have a bad opinion of everybody.”

She became my favorite character, along with Mrs. Cadwallader, the rector’s wife, and Dorothea’s beloved sister Celia. They’re the women in the novel who possess the endearing combination of good sense and wit. They add some much needed jocularity and even sarcasm to counteract the seriousness of the other characters.

This is a very superficial discussion of likes and dislikes about the novel, but if you’d like to plumb the depths, I’d recommend Egan’s post to get you started. I’ve also checked out Rebecca Mead’s My Life in Middlemarch. We’ll see how much patience I have for it.

If you’ve read Middlemarch, I’d love to hear your thoughts.

2 thoughts on “Middlemarch: Vanquished at Last”