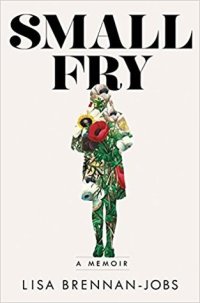 In case you were wondering whether Steve Jobs was a jerk to the people in his family as well as his colleagues, um, yes. The answer is yes.

I have no real interest in Jobs himself or the tech industry as a whole, honestly, but I do love a good memoir and this one, Small Fry, was written by Jobs’ daughter Lisa Brennan-Jobs and gives us a window into the infamous personality of Steve Jobs.

I am personally having feelings about people in positions of power (whether they’re the heads of companies or, you know, countries) who are jerks:
-Why do we put jerks in charge? (Even jerks who are super smart…)
-Why do we let some people act like jerks and not others?
-Why must we suffer the terrible personalities of some people in charge when we could put other, more capable, and more thoughtful people in charge?

I guess I’m a bit world-weary right now. But all that is to say that I really wanted the dirt on Jobs and his personal interactions. I mean, we’ve heard he was a jerk to people he worked with, but what about his family?

A capable writer, Brennan-Jobs details her early life with her mother, artist Chrisann Brennan, and father Steve. She mostly lives with her mother, growing up in the Bay area in and around Silicon Valley, and paints a picture of a young girl very much relying on her parents to tell her who she is, if that makes sense, in the way that we all do. Except that her father is somewhat famous. Certainly everyone knows him in Silicon Valley. So, much of the story is centered on whether Jobs was, at any given moment, acknowledging her as his daughter.

And, all in all, I got the sense that he was kind of a tyrant. Mercurial, irrational, needy, overly generous one moment and painfully withholding the next. A narcissist with boundary issues. Unfortunately, he was most miserly with his love. Brennan-Jobs’ portrayal reminded me of all the books I’ve read about Henry VIII.

Back to my above questions: why do we let some people act the way they do? If it’s because we think we have to let geniuses act like jerks in order to be geniuses, well, that’s a bummer.  And I’m not implying that Lisa could have ousted her father in some way. She was just a child. But I am really just interested in the power dynamics at play in her life. Her mother often depends on him for financial support. Jobs’ wife (Lisa’s step mother) certainly depends on him and she and his other love interests enable his bad behavior in order to curry favor on their own behalf. But what if we stopped catering to jerks? What if these women had stood up to him more often? What if Lisa’s mom had sued for child support (before the state did that on her behalf)?

Of course, maybe that’s un-feminist of me. Maybe these women didn’t feel like they could stand up for themselves?

This is the passage that most explains what I’m driving at:

“When people speak and write about my father’s meanness, they sometimes assume that meanness is linked to genius. That to have one is to get closer to the other. But the way I saw him create was the best part of him: sensitive, collaborative, fun. The friends he worked with got to see this more than I did. Maybe the meanness protected the part that created—so that acting mean to approximate genius is as foolish as trying to be successful by copying his lisp or his walk or the way he turned around and wagged his hands around his back and moaned to pretend he was making out.”

So, I guess, anyone out there acting like a tyrant and posturing that they are, let’s say, a very stable genius, come off it. I have much more respect for people who are confident, kind, self-aware leaders. And I love it when narcissistic jerks get put in their place. We need to do more of that.

This post got messy, but hopefully something about my point came across. Anyway, if you just like reading well-written memoirs and don’t give a fig for Steve Jobs, I’d still recommend this one. Lisa Brennan-Jobs is a talented writer.

2 thoughts on “Big Surprise: Steve Jobs was a Jerk to His Daughter”