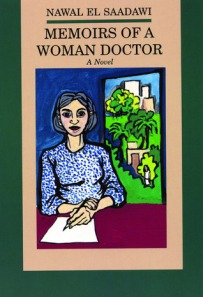 Is this fiction or nonfiction? Honestly. I have never had such a difficult time figuring it out. I’m pretty sure it’s a memoir though, right? Even though the subtitle is “a novel.” ???

Ok, I just reread the intro. It’s a novel. Sheesh.

At any rate, these reflections, Memoirs of a Woman Doctor: A Novel by Egyptian author Nawal El-Saadawi (Catherine Cobham, translation), make up a collection published beginning in 1958 as chapters in a serial as far as I understand. The intro. was a little confusing. I was going to count this as a selection for my classics challenge but if, as I understood from the intro., this collection wasn’t published together until the 80s, well, that blows that idea.

All that is beside the point, however, as I enjoyed this peek into the brain of a truly brave feminist. The narrator tells of her upbringing in a traditional Arab (I know, broad, but that’s how she refers to it) household in Egypt where her father rules the roost, her mother aims to please, and her brother is afforded privileges the narrator can only dream about. Her mother is raising her to be a  proper wife, which ultimately results in rebellion.

As a child the narartor sees that unlike her, her brother is allowed the freedom to play all day, the best cuts of meat at the table, and the fun of turning somersaults or running when he wants. Meanwhile, the narrator is taught to cook and keep house. She’s outright told that she exists to serve the men in her life and is often paraded before potential husbands. Instead of assuming traditional expectations, however, El-Saadawi rebels. She devotes her adolescence and early adulthood to learning and  eventually becomes a medical doctor.

There are some icky descriptions of bodily functions, so watch out for those if they’ll bother you. But mostly the narrator takes us along as she uncovers the mysteries of the human body, fascinated by their function.

Her studies prove what she suspected all along: underneath their clothes, e.g., as cadavers lying on tables in a classroom about to be dissected, men’s and women’s bodies are mostly the same. She feels affirmed, despite the blatant sexism directed at her throughout a program filled with men, and concludes that men and women are, in fact, the same. Equals.

She goes on to practice medicine but there’s an odd section where she leaves her job and retreats to the hinterlands to “find herself.” And, weird though it was, I really liked that section. She leaves society in search of her true wants and needs and comes away with a sense of who she is on the inside, without the pressure of medical science or societal expectations of womanhood.

The thing I liked most about El-Saadawi’s writing was the way that she put things kind of bluntly. She explores complex topics but her writing is straightforward and self-assured.

“Why had God created me a girl and not a bird flying like that pigeon? It seemed to me that God must prefer birds to girls. But my brother couldn’t fly and this consoled me a little. I realized that despite his great freedom he was as incapable as I was of fling. I began to search constantly for weak spots in males to console me for the powerlessness imposed on me by the fact of being female.”

You feel the longing and the disappointment and the hope all at once in that simple passage.

The writing itself and the ideas therein are the star of the show here. The plot is secondary, in my opinion. The romantic ending – I wasn’t too sure about that. After all this strife, the narrator ends up happily married and that seems the end of her story. While it’s heartwarming and gratifying that she found love after a divorce, I can’t help but sigh at the story ending with a typical happily ever after. I console myself that the bulk of the novel was about self-discovery really, and for this character, that culminated in her ability to demand more of her relationships.

Also, there’s one scene where she and her boyfriend are sitting on a bottom stone of one of the pyramids, just hanging out, chatting. How cool would that be?