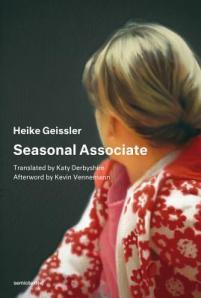 A reviewer on Goodreads described Seasonal Associate by Heike Geissler as “dreamy” and that’s pretty much the size of it. A memoir of Geissler’s stint working for Amazon Germany, this book wraps you up in a fog of, well, dreamlike narrative. You can see a few steps ahead of you, but perspective is tough to come by until Geissler hits you with a sudden zoom out.

What I was hoping for when I started it was a poignant statement on the nature of  modern work (to which I do not take automatically, myself), and what I got was a stomach-churning slog through the drudgery of dismal, repetitive labor where each day is much the same, where the pay is low, the managers are (often sexist) asshats, and the narrator gets swallowed up inside the mind-numbing work of receiving massive product shipments…which, of course, is itself a statement on the nature of work.

So I guess the book did, in fact, meet my expectations there. It also spurred these thoughts:

Anyway, all of this builds toward an inevitable end, which I won’t give away here. But the way Geissler leaves Amazon is pretty delightful and the conclusion is poetic justice.

A warning: I had trouble from the beginning with the second-person perspective. You do this. You do that. I get that it’s a device that’s used to put the reader in the position of the narrator, but I found it irritating all the way through.

There is this hilarious moment that results where you’re, as she hopes, picturing yourself as her and Geissler is saying “You do this. You go here. You talk to your boss in this shitty way and really give him the business.” And then she says, “I want to do what you’re doing, but I can’t because I’m not brave enough.” And then she goes back to talking about what she did that day. It’s kind of great.

But most of the time I felt like the second-person perspective either didn’t work as intended or the poignancy got lost in translation (it was written in German and I read the English translation).

Whatever the result, it was fascinating to read a worker’s impressions of a giant like Amazon. I’d love to read a version from a U.S. worker.