I’m gonna’ need a major palate cleanser after plowing through Madame Bovary and Anna Karenina in one month. I’ve read 7 books so far in 2019 and I feel like I’ve read 20.

Anna Karenina is Tolstoy’s great novel centering on Anna’s love affair with Count Vronsky and, despite its doorstop status, this tome had me from the get-go.

About a zillion issues affecting 19th-century Russian society are covered in the novel and I do not know enough to talk about them intelligently but, to name a few, they include: liberal reforms (especially the Emancipation reform of 1861), the Industrial Revolution, education reform, military conflict, and the decline of the landed gentry. Also, art, beauty, and religion. I can see why it’s known as “the best novel ever written” (I read that somewhere) because it covers a lot of ground and covers it eloquently with sympathetic and multifaceted characters.*

But like the delinquent former English major I am, I noticed these themes and, rather than ponder their great truths, rushed through to the bits with the love stories. I’m hopeless, apparently.

The will-they-won’t-they gets me every time.

And the characters are just so wonderfully diverse and interesting. Who has time for social issues?

For starters, there’s Prince Stepan “Stiva” Arkadyevich Oblonsky, Anna’s brother and a civil servant who, at the beginning of the novel, is wrapped up in a drama with his wife Dolly. She’s just discovered his infidelity and while I felt for her, I couldn’t help but thoroughly enjoy Oblonsky. As Tolstoy described his morning routine, I had A Well Respected Man by the Kinks running through my head.

“There was no solution, but that universal solution which life gives to all questions, even the most complex and insoluble. That answer is: one must live in the needs of the day—that is, forget oneself.”

Oblonsky goes about his business like the well-respected man about town that he is and, while his obliviousness and lack of empathy for Dolly infuriated me, I still found myself enjoying his scenes. 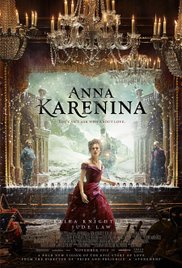 I’m going to watch the Keira Knightly movie this week, even though I find her to be something of a tomboy who inappropriately clomps about most costume dramas.

There’s Anna, of course, who’s just so desperate and foolish-in-love and totally likeable. She shows remarkable self-awareness as she carries out an affair with Vronsky, but I was irritated as I watched her become powerless over the emotions that carry her away to her last fateful action. Which, tbh, I did not really understand. The build-up to this dramatic end was just not there for me.

And next, Kitty (Princess Ekaterina Alexandrovna Shcherbatskaya – man, Russians have long names) with whom Levin (Konstantin “Kostya” Dmitrievich Levin) falls in love, provides the other love story in the novel. At the beginning of the novel, she’s actually  in love with Vronsky, who’s not in love with her, but is leading her on like the incorrigible fuckboi he is.

Levin pursues her and there is a great skating scene at the beginning that really gets you in the mood for some Russian weather. You can’t beat the sense of place in this novel. But anyway, by the end of the novel, Kitty is married to Levin and has given birth to their first child. She becomes a woman and because of her darling personality I think, it’s a joy to watch her grow.

And thus ends my terribly lacking discussion of the novel. I loved it and as far as I know, it is a fantastic introduction to the classic Russian novels. As translator Rosemary Edmonds says, (I read this on Wikipedia) it covers the “vast panorama of Russian life” and I certainly finished the novel feeling as though I’d gotten a foot in the door with Tolstoy.

*(All the while I’m typing this, I know that books and papers and studies have been written on this novel and by much smarter people than me, so my discussion of it pales in comparison to what’s available. I’m not worthy and I know it, so this is a basic, man on the street-type review.)

p.s. This is my entry for the Translation category of the classics challenge.