I saw this on a Facebook post in a book group I’m in and thought I’d try it just to see what my brain comes up with. Then, I asked my boys to fill it out too. We thought there could be a ton of overlap between categories but tried to avoid it.

BOOK I HATE: The Shack. The effing Shack. If I never hear about that terrible book again, it will be too soon.

BOOK I LOVE: Jane Eyre; I love lots of books. This is just one.

BOOK I THINK IS OVERRATED: The DaVinci Code ; Girl, Wash Your Face (So sick of seeing this schlock everywhere, especially endorsed by MLM sellers.)

BOOK I COULD READ ON REPEAT: One Thousand White Women: The Journals of May Dodd by Jim Fergus, The Lord of the Ring series, The Secret Garden

BOOK THAT MADE ME FALL IN LOVE WITH BOOKS: Caddie Woodlawn by Carol Ryrie Brink – I read this in about third grade and, while I was already an avid Baby-sitters Club reader, this book sort of opened me up to the general wonder of books, maybe because it was about a girl my age and set in a different time. Historical fiction is still one of my favorite genres.

BOOK THAT CHANGED MY LIFE: Operating Instructions by Anne Lamott; given to me by a friend as a young mother and it helped me to have less mom-guilt.

GUILTY PLEASURE: Books about French women doing it better; books by Cathy Glass; Confessions of a Shopaholic by Sophie Kinsella

BOOK I SHOULD HAVE READ BY NOW BUT HAVEN’T: War and Peace, The Catcher in the Rye, Les Mis, and anything by Virginia Woolf 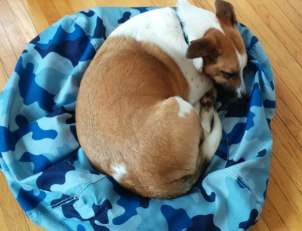 Unrelated pic of Artemis for fun

BOOK I HATE: The Pearl. Had to read it for school. Who knew that a book so short could be so tedious, or that symbolism so heavy-handed could be regarded as impressive?

Book I LOVE: Moby Dick. It seems to be polarizing, but I love it. Thought about it for “Underrated” but it’s recognized as a classic so it can’t be THAT underrated.

BOOK I THINK IS OVERRATED: To Kill A Mockingbird. I read it and it was totally decent. But it gets wayyy too much hype. Fight me.

BOOK I THINK IS UNDERRATED: The Name of The Wind (and the Kingkiller Chronicle in general) is amazing. But it is naturally overlooked because it’s “genre” fiction. And it hasn’t crossed over to the mainstream like Game of Thrones or Harry Potter, despite being better than either.

BOOK I COULD Read ON REPEAT: The Long Goodbye by Raymond Chandler

BOOK THAT MADE ME FALL IN LOVE WITH BOOKS: The Hobbit by J.R.R. Tolkien, particularly the Michael Hague illustrated edition gifted to me by my Aunt Kate. It features an engaging story, glorious world-building, and the book itself is beautiful.

BOOKS THAT CHANGED MY LIFE: The Hobbit (because see above), Life Inc by Douglas Rushkoff, Watership Down, On the Genealogy of Morality, After Buddhism by Stephen Batchelor, and the works of David Gemmell. No one book in particular for Gemmell, just all the down-to-earth philosophy he doles out through his characters.

BOOK I SHOULD HAVE READ BY NOW BUT HAVEN’T: A People’s History of The United States

BOOK I HATE: A Thousand Acres by Jane Smiley

BOOK I THINK IS OVERRATED: The Wide Sargasso Sea

BOOK I COULD Read ON REPEAT: Ender’s Game

BOOK THAT MADE ME FALL IN LOVE WITH BOOKS: Redwall

BOOK I SHOULD HAVE Read BY NOW BUT HAVEN’T: Moby Dick

So, how about you? What would you list under some of these categories?