I sped through two works of true crime last week. I can’t get interested in any of the classics I’ve been wanting to read because all I want to read about is murder, apparently. 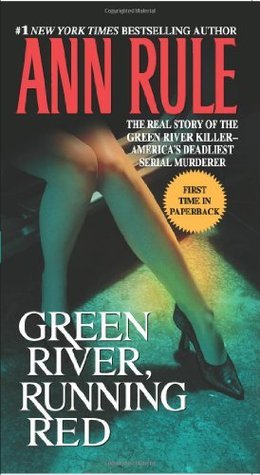 What kicked off this spree was listening to the Crime Junkie podcast and hearing the story of the Green River Killer. It reminded me that Ann Rule had written a book about the case that I had glanced at and then dismissed because I wasn’t interested. Well, I downloaded the Kindle book from the library and set about getting all the terrible details.

Green River, Running Red is a story about the investigation of murders committed by a serial killer who targeted mostly women involved in prostitution beginning in the 80s (and possibly late 70s). Rule tells the story of many of the victims and what led them to prostitution along the SeaTac highway in Seattle. She does tell the story of the killer, Gary Ridgway, a classic normal-seeming blue collar worker who left some of his first victims along the Green River. He was finally caught in 2001 and eventually convicted of 49 murders, though he confessed to around 70, and is suspected to have been responsible for even more.

Ann Rule is my favorite true crime writer, hands down. Her focus in Green River, Running Red, like in her other books, is the police investigation of the crime at hand and she pays special attention to the victims and their stories, making sure to humanize those whose lives are often disregarded by larger society. She does paint a picture of the killer’s life and upbringing because she, like her readers, is fascinated by the personality that can lead someone to kill and kill over and over again.

Those stories are told within the framework of the police investigation leading to the killer’s eventual arrest. I recommend reading this only if you’ve got a strong stomach. There are graphic descriptions of the ways in which victims’ bodies are found, but I found the description of Ridgway and clearly psychopathic personality almost equally disturbing.

Another Crime Junkie episode reminded me of the case of Sylvia Likens, who was tortured to death in the home of a woman who was supposed to be taking care of her while her parents worked with a traveling carnival outfit. This case is well-known in Indiana, where I live, as it took place in Indianapolis, so I was eager to learn more.

After some online research, I landed on House of Evil by John Dean, which was first published in 1966, just a yer after Sylvia’s murder.

What’s unique about this terrible story is the fact that Gertrude Baniszewski, caregiver to Sylvia and her sister Jenny, solicited the help of her own daughter, Paula, as well as several neighborhood children, to abuse and eventually kill Sylvia. This story also requires a strong stomach, so if you can’t stand stories of child abuse or violence, avoid it, and maybe read the Wikipedia article, which is pretty correct, instead.

A review note: I thought this book was well-written, but I noticed some Goodreads reviewers calling it “scattered.” I didn’t think it was at all. There’s a clear progression along a timeline leading from the Likens sisters being dropped off with Gertrude right through the trial. Scenes are written pretty much chronologically.

On a tangential note, it’s hard to say why I read true crime. After finishing these books, I wondered, am I turning someone else’s tragedies into entertainment? I can’t honestly say that that’s not part of what I’m doing in reading these books. I mean, I think some  fascination with abhorrent behavior is natural. We all like to tell or listen to incredible stories and then remark “Isn’t that crazy?” And wonder how or why something terrible/crazy was allowed to happen. But is this kind of leisure reading akin to watching reality TV where the struggles of the people being filmed are offered up as entertainment? I don’t have an answer.