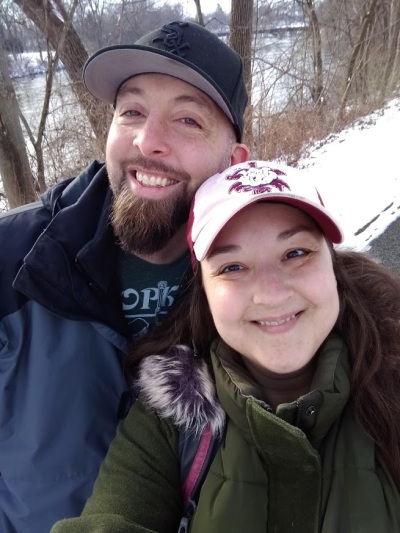 The couple that reads together also sometimes hikes to the library in the snow together.

I’ve noticed other bloggers doing a sort of monthly wrap-up. Stacey of Unruly Reader is one of my favorites. 🙂 I thought it might be fun to do the same.

Especially because Ben doesn’t have a lot of time for blogging, so this is a good way to share what he’s reading even if he doesn’t write verbose reviews like I do…

It’s already a couple of weeks into February, I know, but I just thought of doing this, so here we are.

What Shannon read in January:

Sorry, they’re not clickable because they’re in a “gallery” set-up (get on this, WordPress). But here are links to my reviews:

What Ben read in January:

Sins of Empire
Fun epic fantasy in a world that includes both magic and gunpowder. It’s book one of a series, but there was an earlier series featuring some of the same characters. I might read that too even though now I’m thoroughly spoilered up. Seems like some heroes lived long enough to become villains.

The Castle on Sunset
Fascinating look at the history of the Chateau Marmont. Hotel histories are kind of a thing for me now, after I read about The Plaza last year. Fascinating how so many hotels are almost completely anonymous, but then some become huge cultural icons. Lots of Hollywood gossip and history wound up in this one, although it gives disappointingly short shrift to the Sunset Strip era of our lifetime. Would have appreciated a little more rock n roll along with my Hollywood.

This one was really good: dense but readable, and full of huge ideas. Pretty impressive to read how many of the concepts that we think of as being products of the modern scientific mindset were actually formed in ancient Greece in the first century BC. I may have to read some Lucretius at some point, the book hypes it up so much.

Shannon again: As you may be aware, Ben and I have a friendly competition every year to see who reads the most books. You’ll see I’ve made a good effort in January, but note that I am also famous for my reading slumps. I will inevitably stall out and have some 1-3 book months, and I fully expect Ben to win our challenge in 2020, as he has the past several years. 😀

Ben responds: I think Shannon may be overstating my chances for the 2020 race, but I’m not giving up. Gonna try to bring the noise in February. Taking my inspiration from the words of professor Gerald Lambeau,  “So, let this be said: the gauntlet has been thrown down, but the faculty have answered, and answered with vigor.”

Thanks for reading. Have a good week, everyone!