I discovered Natalie Barelli three weeks ago and I am now already at the point where I will read anything she writes.

On her website, Barelli says she writes “psychological thrillers, domestic noir with a touch of dark humor” and I’ve only just now realized that “domestic thrillers” is a genre.

I have only listened to the audiobook versions of her books so I can’t speak for the hard copy reading experience. The audiobooks are always narrated well by talented readers and the productions are solid.

So far, I have listened to:

Blurb: “When Claire sees Hannah Wilson at an exclusive Manhattan hair salon, it’s like a knife slicing through barely healed scars. It may have been ten years since Claire last saw Hannah, but she has thought of her every day, and not in a good way. So Claire does what anyone would do in her position—she stalks her.”

Unreliable narrator, domestic worker, haunting past. Loved it from the get-go.

Blurb: “Tamra never dreamed she would marry someone like Mike Mitchell: handsome, rich, a wonderful husband… until she finds out that Mike is having an affair. But Hell hath no fury like a woman scorned, and Mike Mitchell should have remembered that before he made a fool of her.”

It’s not as cheesy as it sounds. I mean, in some respect all thrillers are melodramatic and often lack character development and plot depth, I know. But this book is not soap-opera-melodramatic. It’s logical. But still spicy enough to keep me reading. I loved the protagonist.

Blurb: “Katherine knew she’d had too many drinks, but they were only going a short distance. And as Eve pointed out, it was late, there was no traffic anyway…Now, Katherine would do anything to turn back the clock.”

This is a delicious romp involving a blackmail scam. I loved it. 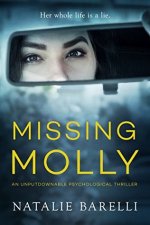 And right now I’m listening to Missing Molly, which I find to be a bit less skillful as far as building suspense. Also, the story often quotes websites, newspapers, and podcast episodes, and I always get annoyed by that kind of thing. I feel like I’m stepping away from the story even though they’re supposed to enhance the story. So I think that is coloring my opinion.

What I love about Barelli’s books is that they all involve a female narrator who trusts the wrong person/people. Sometimes they are naive, but that’s probably also what makes them relatable.

I bet that quality is appealing to readers because one always like to feel they know more than the protagonist. Think of all the times you’ve shouted at an actor in a horror movie, “No, don’t go in there!” You know what’s coming and the character doesn’t. It’s part of the fun.